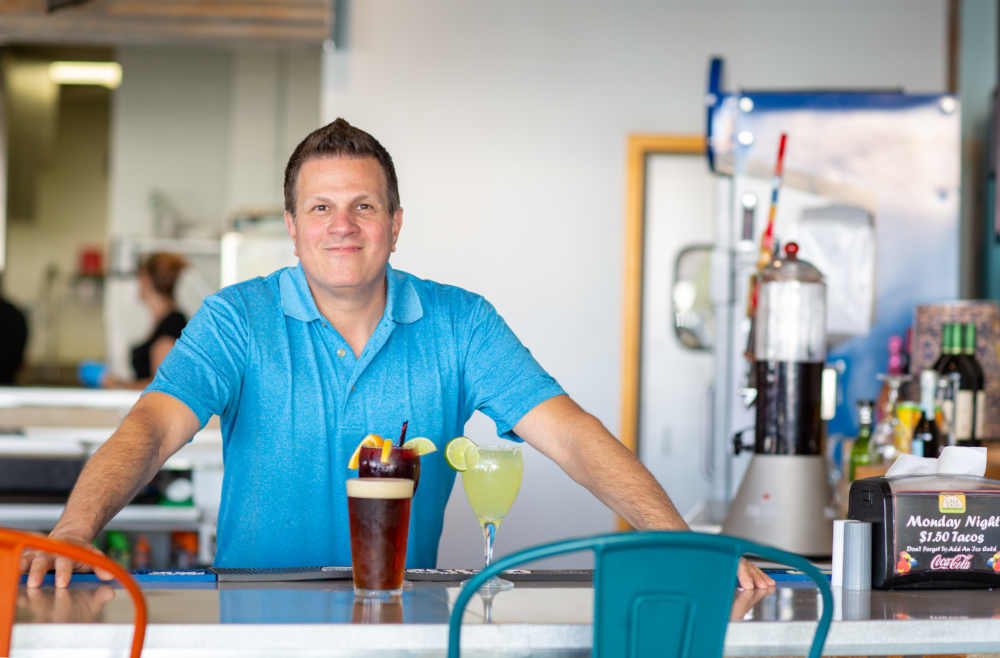 The History of Casa Taco

James Pecherski, the owner of Casa Taco, is originally from Detroit Michigan.

Being born into a family where both his mother’s family and his father‘s family were very food-centered and loved to cook pre-destined James to be a Professional Chef.

James started working in commercial kitchens with his Polish grandmother at the age of nine. James says “It wasn’t like I was actually cooking but rather cleaning tables washing pots and filling salt and pepper shakers while my grandmother and her crew catered Polish weddings.... that exposure made me very comfortable in that environment early on in my life.” While in his sophomore year of high school James got his first job at a local steakhouse as a dishwasher and quickly moved up to line cook at the age of 15. James worked at the steakhouse until he graduated high school.

He moved to Los Angeles California in 1984 and took a job with the Gilbert Robinson Corporation and “Houlihan’s Old Place.” Houlihan’s gave James his first real exposure to a broader spectrum of food “made from scratch food” by Professional Chefs. He moved to New Jersey in 1986 and went to work for an Olympic Culinary Team Chef at a locally renowned country club.

Eventually, his parents urged him to return home to get a college education so he returned to Detroit to attend Wayne County CC, then transferred to Arizona State University. He stayed two years in ASU’s business management program before realizing his true dream was to become a Professional Chef. James applied for and was accepted to Le Cordon Bleu Culinary Institute in Scottsdale.

This is really where the fire ignited! The Chef instructors at Le Cordon Bleu focused primarily on indigenous local ingredients and localized flavors. James fell in love with Southwestern cuisine.

Toward the tail end of the two-year program James was referred to and hired by local Detroit Chef Jeff Drew (currently chef/owner of The Snake River Grill in Jackson Hole WY), who at the time was running a restaurant at the River Place Inn, under the direction of famous Chef Jimmy Schmidt.  Schmidt was the Chef and owner of the famous “Rattlesnake Club,” located on the bottom floor of the iconic Stroh River building in downtown Detroit.

James went on to work for Jeff to open a Southwestern concept for Jimmy Schmidt called Cocina Del Sol.

Two years later, James transitioned to the main restaurant, ”The  Rattlesnake Club,“ as the Executive Banquet Chef for Jimmy Schmidt.

Soon after, opportunity knocked and James was hired on as the Sous Chef for world-famous Mark Miller’s Coyote Cafe in Santa Fe NM. It was here that a love for chile and the sparkling flavors of the southwest were really fused into James’s soul. Over the course of four years working for Chef Jeff Drew at the Coyote Café, James gained the philosophy that “food is love.” Working closely with Jeff really planted that seed in his heart.

James eventually left Santa Fe for an opportunity to revive a failing 500 seat jazz bar Chophouse in Sarasota, FL.  The Chophouse was purchased a year later, and James was asked to return to the Coyote Café by Mark Kiffin (Coyote Café Corporate Chef) and work with him during his final stint at the Santa Fe location. Kiffin went on to open the Compound in Santa Fe.

Back in New Mexico, working at the Coyote Café, James made plans to join two friends on a 2 1/2 month-long expedition into Mexico.

Exposure to the indigenous ingredients of Mexico and the local flavors of the various regions introduced James to an entirely different flavor profile. Starting in Mexico City, the group traveled city by city across Mexico all the way to Puerto Vallarta, then back across Chihuahua.

Upon his return James had a job waiting in the wings — a referral from one of the Chefs under Jimmy Schmidt. James moved to Hilton Head SC where he ran a five star catering facility on Palmetto Dunes Resort. Realizing this wasn’t his destiny, James returned to New Mexico a year later and waited for an opportunity to open his own restaurant.

In 2001, while visiting Elephant Butte, James saw a property located near the lake, and decided that this was going to be his start.

James designed, built and opened the Paradise Grille and Cantina in 2002, and the concept was born.

“Paradise Grille and Cantina” operated as a Southwestern/New Mexican cafe with a tropical theme until unfortunate situations caused its closure. The restaurant was re-opened in 2005 as “Casa Taco.”

After a brief hiatus in IT, James resumed ownership of Casa Taco in 2010, bringing back some of the Paradise Grille favorites and elevating the food program to a new level.

Through a total concept re-branding, “Casa Taco” became a local favorite. In 2015 James opened a second location in Albuquerque on Academy Road.

Casa Taco is an upscale Taco dive offering uniquely prepared craft Tacos since 2002.  We are a privately Chef-owned business and we are very food focused and quality driven.

Our philosophy and parent company name is FOOD IS LOVE. Creating amazing and delicately prepared food for our guests is a job we take very seriously.  We prepare it with love, as if we were feeding our own family.  This is the Casa taco difference!

We make everything from scratch and take pride in serving the best customers the best food.

If you are a great multitasker, take direction well, learn quickly, can handle a fast pace and love tacos, then you should definitely APPLY!

Casa Taco is open 7 days a week for Lunch and Dinner in Albuquerque, and 6 days per week in Elephant Butte.